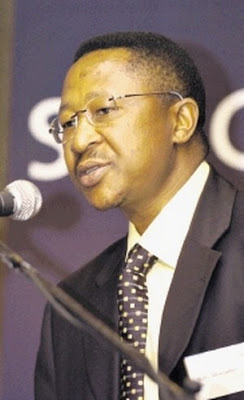 If time management is an indicator of executive competence (and it usually is) then do not expect much from the SABC's new group CEO Solly Mokoetle.

After a number of carefully scheduled appointments to interview him (at the behest of the SABC itself) were put on hold because he was doing something else, one is left with the impression that his skills in this department suck.

Either this is because after just one month in the job it is already more than he can cope with, or because he has been infected with the SABC's traditional contempt for those outside its hallowed halls.

When Mokoetle finally does talk to me he complains that I have hauled him away from a meeting with his board.

Strictly speaking, "his" board was the interim, ANC-loaded, board that appointed him and not the current board, which, like it or not, will have to deal with him.

Nameless members of the board were reportedly, and not unsurprisingly, unhappy about having a CEO foisted on them, and one imagines this may make for an uneasy relationship.

"Not at all, not at all," he says. "I think that matter has been put to bed. None of the current board has indicated that they have any problems with my leadership."

Not according to some reports, I venture. "You're flogging a dead horse," he says crossly.

Mokoetle, of course, is not new to the SABC. He was chief operating officer from 2001 to the end of 2006. Opinion is divided about his part in the shambles there, with some, not least Mokoetle himself, pointing out that when he left the corporation it was making a profit of more than R500-million.

However, a forensic investigation fingered him for complicity in "collusive tendering", which saw contracts worth R56-million being awarded to companies with links to senior SABC executives.
Mokoetle says he had nothing to do with it, but the fact is that he was in charge of the commissioning department that made these payments, so at the very least there are questions about whether he can be relied on to know what is going on under his nose.

The so-called Gobodo Report has never been made public, but after it was shown to the board Mokoetle left. Reports said he was escorted from the building by security guards, a suggestion he finds "very laughable".

He left because his contract expired, he says. The board asked him to extend it by two years, and why would it do this if there was any substance to the allegations made in the report?

He agreed to stay on to help the new, and wholly inexperienced, CEO Dali Mpofu find his feet, but then left after a year.

"I wanted a breath of fresh air outside the SABC."

Mokoetle, 54, left South Africa in 1977. He worked for Radio Freedom, which was to the ANC what the SABC was to the Nats, namely a propaganda machine.

From Radio Freedom he went to Canada, where he obtained a masters degree in journalism and worked for the Canadian Broadcasting Corporation until returning to South Africa in 1994 and joining the SABC.

What, I ask, makes him think he is the right man to pull the corporation out of the hideous financial mire Mpofu left it in?

He laughs: "What makes ME think so? I didn't appoint myself."

But he did put his name forward presumably?

"Yes. Because I believe I have the experience the SABC requires."

So, of course, does Irene Charnley, the chairwoman of the interim board. And even those who question the wisdom of his being appointed by the interim board rather than the current board have enough respect for Charnley to give her choice the benefit of the doubt.

Mokoetle says he will stick closely to the turnaround plan given him by Charnley's interim board, which projects the corporation breaking even within two years, and being profitable within three.

He will cut costs in programming, remuneration and travel. He admits what we now all know, that in the past millions of rands were wasted buying content that was never used. This practice will cease. Nothing will be bought without careful analysis of needs, demands and scheduling capacity.
Will he be retrenching?

"Not necessarily. The recommendation from the interim board is to right-size the organisation, and there are different ways of right-sizing."

The other area ripe for cost-cutting is remuneration. Too many employees are being paid too much. He will not give a clear answer as to whether salaries will be cut or not.

He points out that foreign programmes are 10 to 15 times more expensive than local. He will not admit it, but clearly we are going to be seeing even more cheap overseas rubbish than we already are.

As for travel, there will be no more first class for executives, he says. Unless they are flying overseas, when it will be business class as usual.

Does he support the minister's proposal of a 1% levy on taxpayers to fund the SABC? Will he engage with the minister at all?

"The minister is the shareholder and critical stakeholder of the SABC. As a state-owned entity, the SABC accounts to parliament and to the government through the minister. It is inevitable that I will have to deal with the minister."

He gives an uneasy laugh. "Look, this is what has been put across by the shareholder."

If he can turn it around without the extra tax why the need for it?

"I'm not sure the need for the tax was to meet the current financial challenges. I think the objective is for the long-term funding model of the SABC."

What about concerns that this will make the SABC even more beholden to the government?

"At least 80% of funding is from advertising revenue and I don't think anyone has suggested the SABC is a lapdog of advertisers. Are we controlled by the advertisers because they give us 80% of our funding? I don't think it is as simplistic as that."

On the subject of lapdogs Mokoetle reportedly once said on radio that he would be answerable to the minister before the board.

He rubbishes this. "I was appointed by the board and until further notice I will be answerable to the board."

Which is an interesting answer because the only person with whom the minister should engage is the chairman of the board. Not the editor-in-chief, which, as group CEO, is also Mokoetle's role.

After all, how many investigative pieces on government contracts allegedly won by the minister's security company is he likely to run if he knows he will be dealing with the minister very soon afterwards?