WoS-Last Thursday Showcase
Invites you to come celebrate the Johannesburg Premiere of this multi award winning feature film by a talented women team!!

'Gugu and Andile'
(A South African adaptation of Romeo and Juliet) 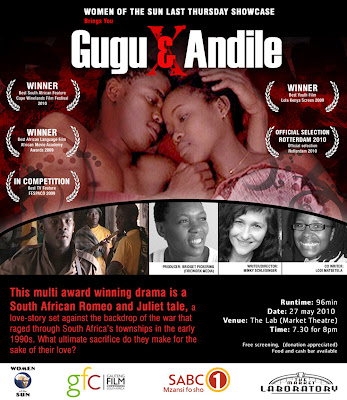 This multi award winning drama is a love-story set against the backdrop of the war that raged through South Africa’s townships in the early 1990s. What ultimate sacrifice do they make for the sake of their love?

It has been seen all over the world and honoured with awards, and now don't miss your chance to see it, network with the filmmakers and other women of the sun.