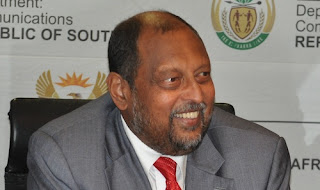 Communications minister Roy Padayachie has withdrawn the controversial Public Service Broadcasting Bill pending further consultation, and wants to consider new models for funding the SABC and community media.
Padayachie's decision follows complaints from concerned groups at public hearings held in Midrand last week.
The draft bill had called for, among other things, the scrapping of TV licences and for an amendment to the Income Tax Act that could have resulted in up to 1% of personal income tax being set aside for public broadcasting.
"I am convinced much more can yet be gained by engaging in further work before a bill is presented to cabinet," Padayachie says. "I have thus decided to withdraw the current draft Public Service Broadcasting Bill."
He says in redrafting the bill the department of communications must consider the "developmental and democratic goals of the republic". For these to be best served, "it is imperative that our broadcasting policy is at the cutting edge of our digital age".
Also, broadcasting policy requires "wholehearted and energetic mobilisation of state, industry and societal role players".
Specifically, Padayachie wants a review of legislation and regulations to ensure "policy and legislative alignment and consistency". And he wants a review of "research done of funding options for the SABC and community radio" and an "economic modelling exercise" to "begin to look at SABC and community media costs and projected costs of digital migration in the sector".
The minister's decision to pull the plug on the draft bill comes in the wake of heavy criticism from broadcasting lobby groups.
Last week, the Centre for Constitutional Rights said drafters of the bill had misconstrued the public broadcaster's function and its role in the dissemination of knowledge.
The bill, which was released for public comment last October, aims to repeal the Broadcasting Act of 1999, to align the broadcasting system with the country's development goals.
M-Net and MultiChoice joined other concerned parties in calling for the draft bill to focus only on the crisis-stricken SABC.
The companies said the national broadcaster was in need of relief, and that issues in the draft legislation had to be narrowed down.
Karen Willenberg, director of regulatory affairs at M-Net, said the Electronic Communications Act was the key statute dealing with the licensing and regulation of the electronic communications sector.
"In its focus and purpose, the bill must find its place alongside existing legislation. It should only be dealing with issues of public broadcasting which require regulations over and above what is provided for in the Electronic Communications Act."
M-Net and Multichoice also highlighted the need for a strong financial model at the SABC.
Last week, Padayachie said he would fast-track the finalisation of the bill to deal with poor corporate governance and funding problems at the state broadcaster.
However, a civil society coalition said the bill contained fundamental flaws that could not be rectified by speeding up its finalisation.
Among other things, the bill intends to give the minister what some have called "far-fetched" powers, like authority over the SABC's finances and power to issue directives to its board.
In terms of the current Broadcasting Act, the minister is unable to interfere in the present crisis at the SABC and has no role in the appointment of executive members of the board.
The new bill called for the scrapping of TV licences and for 1% of South Africans' personal income tax be set aside for public broadcasting.
MultiChoice said the proposed one percent income tax funding was huge.
It proposed a public production levy of R250 to be collected by Sars during the tax submission period.
However, broadcaster e.tv said an alternative to funding should not further burden the public and that there should be appropriation from parliament.
The SABC currently has a mixed funding model. Figures from the 2009 financial year show that 64,3% of its revenue came from advertising, 18,2% from TV licences and 2,2% from government grants.
MultiChoice said because the SABC was a public broadcaster, it was there for the public good.
"It must be funded from state revenue, like education and health," said regulatory affairs manager Aynon Doyle.
Rhodes University's journalism professor Guy Berger said the SABC was competing with other stations instead of focusing on its core business, being a public broadcaster.
Staff reporter, TechCentral, with Sapa
http://www.techcentral.co.za/padayachie-pulls-plug-on-broadcasting-bill/19316/
Posted by SASFED at 11/22/2010 10:54:00 AM