PLEASE ensure this reaches ANY independent producers or producer focused people in your membership / friends circle to urgently circulate the below far and wide.

This is ESPECIALLY important for people involved in the INDEPENDENT BROADCAST SECTOR.

SASFED have given some time to reviewing this questionnaire and tried to assist in making it as CLEAR and concise as possible. The answers to this will certainly have a massive impact on the way ICASA will deal with local content monitoring in future so PLEASE do take the time to do this ASAP.

SASFED was asked and agreed to circulate this to its members, so please send to to all who you think might be useful in answering this questionnaire.

ICASA has commissioned a study to assess the cultural, economic and social benefits brought about by South African programming regulations. PYGMA Consulting has been appointed to conduct the study, and has subcontracted ECONEX to assist.

If you are especially an independent producer, we kindly ask that you will help us with the study by completing the survey found at: https://www.surveymonkey.com/s/IndependentProducers
(Press ctrl and click on the link, or copy and paste the link into your browser to start the survey.)

Please ensure that you complete the survey by close of day on Friday  June 14th, 2013.

Instructions for completion of survey:
The survey requires you to provide information about the television station’s ICASA licence, independent program information, financial information, and employment information from 2007 to 2012. It will help if you have this information at hand when commencing with the survey. Depending on your ease of access to the information, the survey should take about 40-60 minutes.

If you are unable to complete the survey in one sitting, you can close the browser window, and re-access your results at a later stage by clicking on the same link in this email on the same computer. (This works as long as cookies are enabled. If not, you will have to re-enter your data. Make sure to click NEXT at the end of each page to save your data.)

Please note that all information will be kept strictly confidential and will only be used for the purposes of this project. You can leave out certain answers, and we encourage you complete the answers you can rather than not completing the questionnaire at all.

Feel free to contact us with any questions – specifically if you are struggling with the web-based format – at surveys@econex.co.za or 021 887 5678.

We look forward to receiving your feedback. Your inputs will contribute to ensuring that South Africa’s programming regulations continue to benefit all stakeholders.

One Week to Go: The Aesthetica Short Film Festival 2013 Call for Entries

Don’t miss the opportunity to enter the Aesthetica Short Film Festival 2013 – registration ends next week! Register your short film by 31 May for the opportunity to showcase your work in an impressive setting to an international audience and win prizes up to £1000! The time limit is 25 minutes and films of all genres are accepted. All submissions must be received by 14 June.

ASFF allows for both budding and established filmmakers to connect with new, worldwide audiences and interact with some of the biggest personalities in the film industry today. High profile ASFF attendees in 2012 included representatives from Warp, BAFTA, Channel 4 and Raindance. Over 200 films will be screened at this unique event, in 15 iconic locations across the historic city of York from 7-10 November 2013. Visit www.asff.co.uk/ to submit.


The NFVF has put out the following press release. SASFED has for some time been pushing the NFVF via our TOE to build ties with other African countries. We are excited by this news and look forward to reviewing the detail of the MOU and what it actually means for our industries, and the filmmakers of both countries who wish to work together. 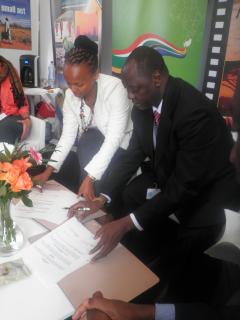 The MOU’s purpose is to afford filmmakers from both the countries an opportunity to access facilities as well as conducting business together.

Speaking at the signing Ms Mkosi said that the MOU will, amongst other objectives create a platform for growth of the African filmmakers as well as encouraging skills transfer. “It will provide the two countries access to filmmaking facilities and opportunities, a great prospect of working together to tell our African stories in order to achieve our strategic goal of globally positioning Africa.”

Ms Mkosi added that “As African countries we are steadily earning a place on the global stage, and working together will guarantee joint development of content as well as marketing of both the countries’ films and talent.”

Mr. Peter Muthie, CEO of Kenya Film Commission had this to say “we are pleased as Kenya Film Commission and the whole of Kenya film industry to be commencing this partnership with South Africa. This is the beginning of a strong relationship that will ensure that we tell authentic African stories. We are also celebrating our first official participation in Cannes and already, opportunities are opening up for our filmmakers.”

South Africa is well-known for telling authentic South African stories, discovering talent and producing award-winning films. Films that have won awards locally and internationally include amongst others Oscar-winner Tsotsi, Skin, Drum, Yesterday, Otelo Burning, Life Above All, Skoonheid, and last year the country released its first 3D animation feature series which had a successful run globally crossing $5.8M in CIS, $3.2M in Poland, 3.1M in Benelux, $3M in Korea, 2.5M in Australia, $1.2M in Italy, $1 South Africa, $758K in Israel and $735 in Portugal.

The event ended with the two CEO’s exchanging gifts from each of the countries.