How Fair Use Brought Dream Deceivers to Home Video

Posted by Patricia Aufderheide on August 06, 2014

A new generation is going to see the fabled documentary "Dream Deceivers," because its director employed fair use. 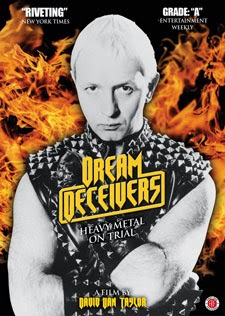 Back in 1992, David Van Taylor ("A Perfect Candidate," "Good Ol' Charles Schulz") went behind the scenes of a notorious "heavy metal/suicide" trial for his first film.  Two young men had shot themselves, and their parents sued Judas Priest, claiming the youths were mesmerized by subliminal messages.  The masterfully-edited documentary was a look inside the vortex of moral panic.

It was also a copyright nightmare. The music and lyrics of Judas Priest laced through the film. A hyper-responsible Van Taylor, confirming to the "clearance culture" of the era, diligently sought the rights from Sony to it all.
“We cleared things that, even then, we shouldn’t have,” said Van Taylor. “People reciting lyrics in the court room, snippets of songs being played backward--everything.”
"Dream Deceivers" was a hit. It premiered at New York's Film Forum, garnered record-high ratings on PBS POV, and won an award from the Independent Documentary Association. But when Van Taylor tried to get home-video licenses, Sony refused, claiming the film would compete with a Judas Priest "greatest hits" video. With that arbitrary decision, Dream Deceivers became lost to posterity, seemingly forever.
But now, 20 years later, it’s out on DVD and digital (on August 5). What changed?
“The fair use revolution,” said Van Taylor.  What he meant was the sea change in the documentary field since the creation of the Documentary Filmmakers Statement of Best Practices in Fair Use in 2005. Van Taylor, one of the documentarians who helped create the Statement originally, had closely followed the increased acceptance of the law’s limited right to employ copyrighted material without licensing, when repurposing and using appropriate amounts.
And since, Van Taylor has become a leading spokesperson for the Statement in the documentary community. He has spread the gospel of fair use to filmmakers one-on-one and at public events from New York to Norway.
Now "Dream Deceivers," Van Taylor's first film, is benefiting from the fair use movement he helped create.
“So much of what I cleared back in 1992 was absurd to clear,” he said, “and now the film seems like such a slam dunk for fair use. We have no qualms.”
Van Taylor had no trouble getting standard-rate errors and omissions insurance, and his distributor, First Run Icarus, was enthusiastic about his decision to make his choices public.
"For years I've felt honored to take part in the fair-use revolution, which has accomplished so much for documentarians," Van Taylor concluded.  "To bring "Dream Deceivers" back to the public finally--and to shout its fair-use bona fides from the rooftops--seems like a perfect ending to the story."
For this original article as well as more about Copyrighting and Fair Use in America, click here.
Posted by SASFED at 9/11/2014 09:36:00 AM