JOBURG THEATRE AND THE CITY OF JOBURG CELEBRATE AFRICA DAY

To commemorate Africa Month this May, Joburg Theatre will be presenting a weekend of AFRICA DAY CELEBRATIONS featuring local and international artists on The Mandela stage at Joburg Theatre on May 22nd and 23rd.

Performances are at 8pm on Friday May 22nd and 8pm on Saturday May 23rd.

Africa Day celebrates the continent's achievements and affirms its vision to create a better life for all. The vision of the African Union is that of “an integrated, prosperous and peaceful Africa, driven by its own citizens and representing a dynamic force in the global arena.

Headlining the AFRICA DAY CELEBRATIONS at Joburg Theatre is award-winning Ringo Madlingozi and Lira. Both are household names in South Africa who represent the best of Mzansi music. Ringo is one of the biggest artists on the outdoor festival circuit and draws thousands of fans across the age and gender divide,  both in South Africa and the continent.  Lira continues to make waves both on the local and international stages including Europe and the USA.

Moving from South Africa up to the West Coast of Africa is singer and dancer, Lura.
Lura is a Portuguese-speaking artiste who stands at the crossroads of the Portuguese and Cabo Verdean culture. This award-winning artiste, who is constantly performing on the international stage, was born in Lisbon to parents of Cape Verde heritage. Lura is signed to Lusafrica, producer of the legendary, Cesaria Evora. Her music is influenced by African Carpo Verde rhythms, jazz, soul and Portuguese pop music. This former swimmer and dancer turned singer, with her beautiful soulful voice, is an exceptional performer on stage. 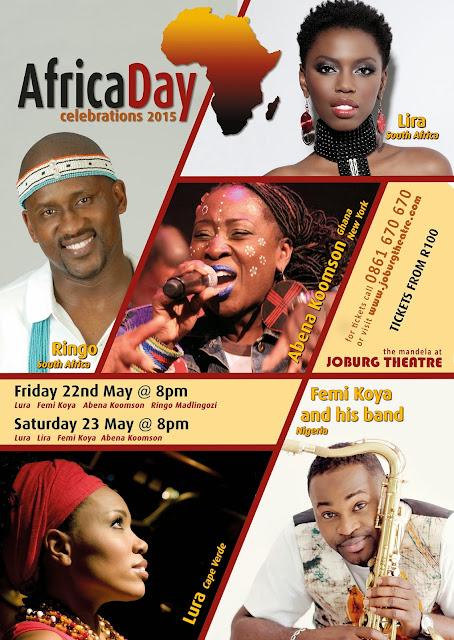