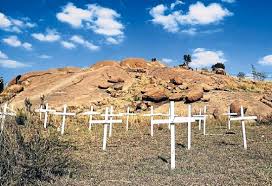 Supporters of the victims of the Marikana massacre will assemble on Friday 29 January, to show their anger at the long delays in the compensation process.

The lawyers representing those injured and arrested in Marikana in August 2012, and the families of the slain miners, will be meeting attorneys appointed by the state for the first time on Friday, 29th January, to begin talks about compensation.

The Marikana Commission of Inquiry evidence leaders concluded in their heads of arguments that compensation for the victims could circumvent very lengthy and painful civil claims cases. Despite this, Judge Farlam omitted any recommendations in this regard in his final report.

On 29 September 2015, President Jacob Zuma announced to the press that he supports “swift compensation for bona fide claims” against government arising from the 2012 Marikana shootings.

While we welcome the fact that the meeting is taking place, we hope that the promise to expedite the process is genuine and that we will not see further delays in this process which we believe can, and should in the interests of justice, be swiftly concluded.

We also note that 17 mineworkers face serious charges, and will be facing a pre-trial hearing in April. This process is going ahead, while at the same time there has been slow movement on the recommendations arising from the Farlam Commission (Farlam report) to appoint a senior counsel to lead a team to investigate 100 police officers to see whether they have committed crimes themselves.

We also note that summonses have been served on a number of people by the legal teams representing the victims. We urge the NPA (National Prosecuting Authority of South Africa) to act independently and swiftly to ensure that all remain equal before the law.