The 2020 Garden Route International Film Festival ‘GRIFF’, today unveiled its feature film, documentary and short film lineup. Continuing its tradition of showcasing emerging talent and celebrating new work from established local and international film-makers, the 2020 edition of the Festival hosts 90 films across multiple genres. The films range from traditional dramas, crime, comedy and thrillers to political and socially-conscious films from many diverse storytellers across a host of different countries.
Taking the challenges of Covid19 into account, this year the Garden Route International Film Festival will run a Virtual Online Festival from the 21st of September to the 11th of October. GRIFF is also bringing the Drive-In Back! The Drive-In portion of the festival will travel throughout the beautiful Garden Route of South Africa across nine towns between the 25th of September and the 11th of October.
“We are encouraged and inspired by the range and diversity of the films submitted to our Festival this year by such visionary storytellers. And we are excited by the opportunity that both the online platform and the drive-in experience will give our audiences this year. Utilizing our secure virtual platform, we will showcase our local and international talent to a national and global market of viewers even more so than in previous years’, said Patrick Walton, Festival Director.
The festival programme includes films and documentaries from a wide range of African countries and from 15 international countries spanning Europe, Australasia and the Americas. For many films it is their South African premiere having never been screened in this country before.
Festival Tickets for the Garden Route International Film Festival:
All drive-in film festival tickets will go on sale on 24 August 2020 and all online tickets and passes to the festival will go on sale towards the end of August via Webtickets.
Please visit our website: www.gardenrouteinternationalfilmfestival.com for all ticket sales information.
About the Garden Route International Film Festival Partners:
GRIFF is pleased to announce its primary 2020 Partners: National Film and Video Foundation (NFVF), WESGRO, Garden Route Film Commission, Media Film Services, Fitch & Leeds and Value Film Fleet.
Press Contacts:
For more information, press packs or images for individual films, please contact us on marketing@gardenrouteinternationalfilmfestival.com
Website: http://www.gardenrouteinternationalfilmfestival.com
Facebook page: www.facebook.com/GRIFFfilmfest 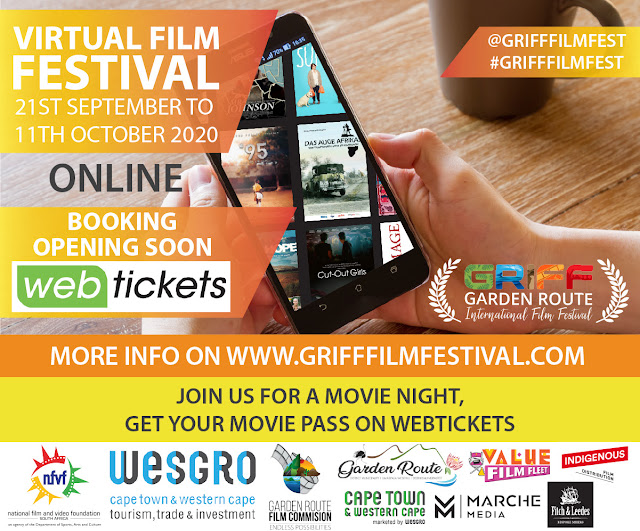