SAGE presents the third in the 2021 Masterclass Season 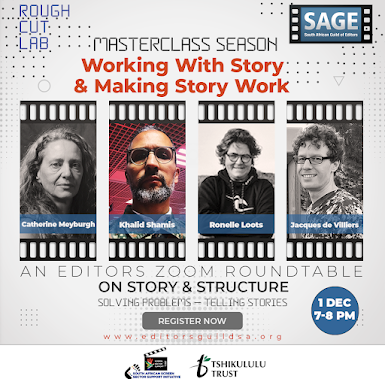 London born, to a Libyan father and a Capetonian mother, Khalid Shamis S.A.G.E  studied film language in London and rose the ranks as a promo director in the satellite television realm, blasting ‘made-for-TV’, pop content from the West into the Arab world, winning a PROMAX Europe in 2001. Wishing to fulfil a dream to explore the life and legacy of his maternal grandfather, he moved to Cape Town in the mid 2000s. The documentary, Imam and I (2011) won a SAFTA, the audience award at the Encounters International Documentary Film Festival and became a document on the histories of the Muslim community in South Africa. His second feature doc, The Colonel’s Stray Dogs (2021), premiered at Hot Docs in April 2021

Jacques de Villiers has edited both fiction and documentary films and doesn't see that much difference between the two. His work has played at major film festivals across the world, including opening the Panorama section at the Berlin Film Festival with Flatland (2019), competing for the Platform Prize at the Toronto International Film Festival with Mlungu Wam (2021), and winning (as editor and co-director) the Best Documentary Prize at the National Geographic All Roads Film Festival for The Creators: South Africa Through the Eyes of its Artists (2011).
Catherine Meyburgh S.A.G.E works as director, editor and producer across documentary, fiction films and television, and has edited over 10 feature films and more than 30 documentaries which have been screened by broadcasters and film festivals around the world. Her work in multi-projection design has been seen in venues from the Met Opera, New York to La Scala, Milano. A collaboration with William Kentridge, Gregory Maqoma, Thuthuka Sibisi and Philip Miller on the multi-projection performance piece The Head & the Load premiered at the Tate Modern in London in 2018. Catherine’s work in video installations has been presented at many prestigious galleries museums and events both in South Africa and abroad.
She is co-director, co-producer and editor on the multi-award winning documentary Dying for Gold (2019)
REGISTRATION LINK: tZ0ufuyqqzIsHdfJfSjd_udIUXfRsxVj6jTk
Posted by SASFED at 11/23/2021 09:59:00 AM